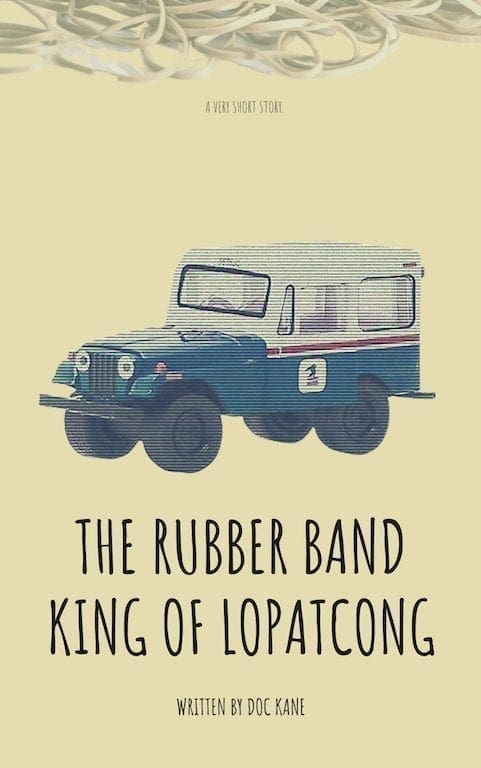 The Rubber Band King of Lopatcong

© All rights reserved. No part of this publication may be reproduced, stored in a retrieval system or transmitted in any form or by any means, electronic, mechanical, photocopying, recording or otherwise, without prior permission of Maplopo.

The name of the township of “Lopatcong” is derived from four words of the Lenni Lenape tribe . . . “Lowan peek achtu onk,” meaning “winter water place for deer.”

— from “The Story of Lopatcong Township,” by Jesse DeGroff

“Thurman Munson is a nice guy who doesn’t want anyone to know it.”
— former Yankee President and GM, Gabe Paul

James Grant turned fifty-three this year. His red-haired Margaret left four months and 22 days ago. The cancer. The pancreas is an interesting organ—seems we only really know what its role is when it’s killing us or someone we love. And, boy, think about what we learn in that short span of time.

James’ job at the post office is a comfortable one, and this little route he’s got is growing along with the town. There’s not much to look forward to these days, but the Yankees are doing alright and Munson really seems to be keeping the guys together. Billy Martin is back where he belongs. Tonight, 7-2, Yanks. The Mets are just horrible this year.

“How’s about them Yanks, eh? Didja’ see that hit Munson grabbed in the 5th? Holy hell. And, Reggie was on fire. White Sox had nothin’ on those guys last night.”

“I can’t believe how well they’re doin’ this month. It’s not last year, but still…”

“That’s all Munson. He’s helping keep those guys together. A World Series win is one thing… keeping things going—something else. Makes one helluva’ captain, for sure.”

“Right about that… Hey, how’s that new P’burg route of yours coming along? I see the houses are starting to pop up out there. There’s talk of a school comin’ in soon—all these folks from North Jersey are certainly bringin’ some momentum to this place.”

“Well, the kids are alright.”

“Those kids up just around McGee’s farm?”

“Yeah, they’re always out there running around playing… out on their Big Wheels, playing football across the yards. It’s kinda’ nice to see all the new spirit in there. A lot different than what we’ve been used to out here in town the last eleven years.”

“Mmmm, for sure. How were the Christmas tips?”

“Ah, alright. I don’t mind either way. I just like the peace and quiet.”

“I hear ya… hey, Jimmy… why don’t you come out with V and me for pizza over at Nick’s or something…? It’s been awhile, ya’ know?”

“Eh… I know… I’m just pretty tired these days. Learning the route and all.”

“Jimmy. There’s like 20 houses on that route right now, and your P’burg route you’ve had for a decade. What the hell ya’ talkin’ ’bout?”

Jimmy starts out the door— “Two weeks,” Frank says sharply. “Or, I’m gonna sic Tony the barber on you to cut that damn hair of yours. This ain’t the 60’s anymore, buddy… and, you’re too old for that shit now.”

A lotta’ guys complain about how their trucks drive… the clutch sticks, the choke is a killer in the winter—but Jimmy’s family is from Forks, and in Forks, they can drive. Mostly tractors and Camaros, but handling a manual transmission in the Pennsylvania mountains does provide some advantages.

The rain today isn’t too bad. It’s peaceful. But the kids are all inside. Margaret is in the rain. 1010WINS keeps him somewhat distracted—Stan Brooks is chatting about Mayor Koch and the 1968 garbage strike in the city. Eleven years goes by fast.

“Thank God I’m in farm country,” Jimmy says to himself.

At the end of the shift, Jimmy swings past Nick’s. It’s still a regular stop for him, but he’d rather eat his pizza alone. A bottle of MacAllan and Coke make for good friends. There’s a lotta’ memory half a bottle of scotch can dig up every night. Vietnam. Jimmy’s father. Failed dreams. Margaret. It always tastes the same, but it’s never bitter.

“What day is it?” Jimmy wonders. “Another. Sun’s out, though. I’ll probably see the kids around Canterbury and Bradford.”

Sometimes the cheap magnetic picture frame that keeps Maggie on Jim’s dash fails to do just that. He always pulls over to pick it up, dust it off, and put it back in a spot he feels’ll be a bit more secure.

Twenty-seven years together is just getting started he thought.

Jimmy always felt he was the luckiest man on the face of the earth—as if Lou Gehrig (bless’im), had nothing on Jimmy.

Maggie was just golden. So nice to the world, so nice to him. When she left, it was like he felt it was destined to be—years of having it so good—his entitlement couldn’t last forever.

Damned dash. There she goes again.

Summer in Lopat, as they’re starting to call it, is a bit more tame than what happens just down the road in Phillipsburg, and certainly across the river in Easton. The families are young—most work in north Jersey, commuting up to two hours in some instances to afford them this little piece of semi-rural heaven in the Garden State.

Storms blow nicely through here. All the corn and open fields reserved for where the houses will soon fill the landscape allow for a steady howl that can sadly have Jimmy lock into the memory of Margaret in ways he shouldn’t.

But today the sun is out, and Bradford and Canterbury approach. It’s about 2:30, his typical time for this spot, and the kids are waiting for him. Some in fact, who are a little behind on their game, have to run out to greet him as he rounds the corner.

“Jimmy! Jimmy! Wait! Do you have any today? Any… extra?” says little Mark.

“Ah, sure, those are okay…,” little Mark replies.

Patrick butts in, “But don’t you have any of the big ones—the one’s like this?” He holds his thumb and forefinger up demonstrating a distance about half the width of a piece of Topps chewing gum.

“I think I gotta few, Michael.”

“Alright… thanks, Jimmy! This is great. I’m gonna make the craziest pea-shooter with these. Thank you so much.”

“Okay, Jimmy—see you tomorrow,” the Canterbury kids ring out.

Jimmy rounds the corner of Canterbury and heads down Bradford. First up is 16. Just beyond, is 24 where Danny is there waiting for him. He just got out of bed it seems, and never misses a chance to greet Jimmy in the summer months. Danny’s a bit older than the other kids, a bunch of whom are now hightailing it from Canterbury’s bus stop to their own houses along the court for a second one-on-one chat with Jimmy.

Patrick catches up with Danny just as Jimmy arrives in front of 24.

“Great Jimmy, thanks…” says Danny, flashing him an eager smile in anticipation of what sort of goodies Jimmy might have for him.

“I’ve got a few things for you today, actually… a coupla’ magazines, a letter or two… and… hang on…” grunting as he reaches far to his left for a package of some sort.

“Ah! Seems like some records, maybe? From Columbia House?”

“No sweat,” says Jimmy, passing along the two giant cardboard-boxed records. “I like Van Halen, too, Danny. Very cool. Patrick! Hey, I’ve got a few things for you too, actually. Let me get them…”

Jimmy flicks through the perfectly aligned, horizontally-stacked envelopes to his left, quickly snagging two, but then left searching for another he can’t seem to place.

“Hang on a sec, Patrick… I think I’ve got another one for you somewhere.”

He puts the truck in neutral, sets the brake, and gets out of his seat to wander in the back for a bit.

He returns with a padded 9 x 12 manilla envelope with Patrick’s name on it, and hands it to the tall little guy just outside the truck’s sliding door.

“Looks like a good one! From Philly! Who do you think this one is from, Pat?”

“Yeah, Mike Schmidt!” says, Patrick, now literally jumping up and down overjoyed with the size of the mailer from Philadelphia Phillie great, Mike Schmidt.

Because the mailer came directly from Schmidt, he knows it must have other goodies in there in addition to the baseball card he’d sent to Schmidt months ago.

“Mike Schmidt, eh? Very nice. Seems like a nice guy. That one came directly from him, huh?”

“Yeah! Maybe there’s a photo in here too,” says Patrick. “So cool! Thank you, Jimmy! Thank you! You’re the best!”

“Alriiiiight, guys… I gotta rock. Looks like a good day for the two of you… I’ll see you tomorrow, right?”

“You bet, Jimmy! Every day this summer, unless we’re at the pool or something… have a nice day!”

Danny ducks away from the truck so Jimmy can pull away as Patrick hungrily tears into the well-taped package from Mike Schmidt.

Just before leaving, he drops them a handful of 64’s.

The kids are stunned.

Jimmy drives down the court, hitting the three houses along its right side and chatting briefly with each of the other kids at their respective homes. At the tip of the cul-de-sac he bends the truck around to the left and heads back up the hill— five more houses until tomorrow.

Before he rounds the corner to head north up Canterbury, he smiles and offers a nod to the first batch of kids who are still at the bus stop sorting through their rubber bands… sorting them as if they were currency; so fairly and squarely like kids still do at this age.

They wave graciously as Jimmy heads around the turn and up into the distance along Canterbury toward Red School Lane.

Jimmy’s time with the kids each day is brief, maybe only seven or eight minutes at best—and only when the sun is out. He doesn’t know exactly why he enjoys this part of the route so much, but he does, and that’s all he needs to know.

For now, though, it’s on with the route, and into a slightly older; quieter area of town. The day is good. He’s okay. And he’s failed to notice for once in an endless number of months, that his beloved Maggie is lying peacefully upon the dirty floor of his old mail truck.

Parting Notes: I hope you enjoyed this little story. Growing up, the mailman was indeed our best friend in the summer. I like to think he enjoyed chatting with us as well. Perhaps you had similar experiences? And, to all the friendly mail carriers out there… thanks for being so cool to kids. We never forget.