The Visitor from the North

Recently, I inherited a Siberian Husky. He’s an adorable furball, but he’s got a bark that’ll scare the pants off anyone. He uses it to great advantage… the unsuspecting schoolkid cutting the corner by our house a bit too closely; the obachan (おばあちゃん) scuttling by us with too heavy a heel on her way to some important meeting; the scootered postal worker as he pushes the throttle on the steepest part of the hill… each of these folks learn very quickly that to surprise the Visitor from the North is to welcome a veritable rise in blood pressure and that, well… isn’t necessarily comfortable.

I suppose it’s no surprise, really. In Japan, they’re used to little dogs… the kind you can stick in a handbag or push around in a baby stroller. Cute, tiny little things that mostly whimper when it drops below 15C. A 35kg, all-white Siberian Husky… mmmm… not so much (even if he does look like the cute otosan (お父さん) mascot in SoftBank commercials).

In the first few months I was getting to know him, that bark scared the bejesus out of me as well.

Have you ever seen “Full Metal Jacket?” There’s a scene where the guys are all bunked in the barracks during basic training and resting ever-so quietly. It’s maybe 4am. Then in the pitch black of night, their drill sergeant bursts into the barracks, illuminating the room, and wildly slamming the inside of a trash can while screaming reveille!, reveille!, at the top of his lungs. The men are so instantaneously petrified they literally lunge downward from their bunks scared to death.

That’s pretty much what this bark is like when you’re not expecting it.

But these days, I hardly notice it. I do expect it. It’s just another sound I hear in the cacophony that is life. I don’t attach fear to it, and it “hardly” startles me anymore. In fact, I think I’m finding it somewhat funny as of late. As people are collecting their hearts from their throats, I’m there chuckling under my breath saying, “come on, now, Chi..” like I’m directing some slightly misbehaving younger brother away from the sandbox.

This week, when I suddenly realized Chiro’s bark was no longer causing me to almost pee my own pants, it dawned on me this is nothing new. It happens elsewhere as well. With parents. Parents with kids. Parents who, in the face of a child whining (or wailing), on an airplane, in the grocery store, coffee shop, movie… everywhere, remain by some miracle of God, remarkably stoic. To the rest of us (particularly those without children), the shrill is nightmarish. “I’m never going to have kids…”  “What the HELL is that sound?” “Where in-the-world is that coming from?!”

I imagine that maybe even people who’ve had kids feel the same way when the kid in question is not their own. (On that note, I read somewhere once that a mother can actually find the sound of her wailing infant to be calming. That’s completely nuts. But, hey… maybe. Possible? Moms?)

Either way, it got me thinking about the things we push out of our lives because of the immediate sense of fear they bring: the first dive off the high-dive that more resembles chlorinated water consumption than diving, the face-first bicycle crash, the eternal sting of a break-up, the failed business. And, yes, the cry of someone else’s baby.

Many times these punctuations of noise into our life stick a bit longer than they should, and in reacting too judgmentally, we self-abusingly avoid them upon their next introduction. Reacting in this way can, sadly, prevent us from pursuing efforts worth struggling through, keep us from experiences worth having, people worth meeting, children worth having. And yet, if we allowed ourselves to get past that initial moment of fright, that initial burst of noise, we might find that on the other side of that fear, there’s a life waiting for us that is likely to be immensely fulfilling.

It’s a thought worth keeping in mind.

So, to the kid walking by our house on his way to school in the morning, to the speedy postal worker, the obachan in a mad dash for the coffee klatch… the next time you see us strutting through these cozy Kobe streets of ours, maybe adjust your approach a bit, slow down to a gentler pace, perhaps give a little bit more room… that’s always nice as well.

And then don’t be afraid to lean in and say hello when you’re in the right spot. I guarantee, your effort will be well-rewarded. Because the Visitor from the North with the big scary bark is really just a giant teddy bear waiting to lick your face off. He’s harmless. Seriously. Just don’t sneak up on him while he’s peeing. 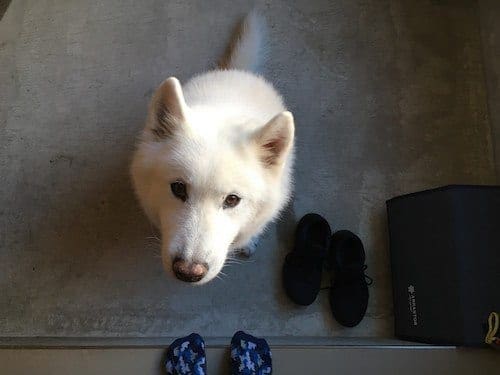